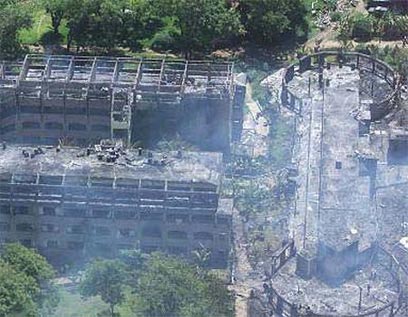 The Mombasa attacks occurred on 28th November 2002 in Mombasa, Kenya. In the first of the two co-ordinated attacks, terrorists crashed a VBIED through a guard gate and onto the lobby steps of the Paradise Hotel, a popular seaside resort.

One terrorist wearing a bomb belt leaped from the vehicle and detonated his device inside the hotel lobby. His co-conspirators detonated the explosives packed in the vehicle, demolishing a large part of the 160-room thatched-roof hotel within minutes.

Amid the screams and billowing black smoke, thirteen people were dead. Scores were badly injured. As the air filled with the smell of burned flesh, several witnesses spotted a single hand flung nearly 200m away.

At about the same time the other terrorist attack was launched. Two shoulder-launched surface-to-air missiles (MANPADs) were fired at a Boeing 757 airliner owned by Arkia Airlines as it took off from Moi International Airport, carrying 271 passengers.

The pilot was 90 seconds into his flight at about 3,000 feet, when he felt an unexpected thump. He thought it was the impact of a bird hitting the fuselage of the aircraft. But he quickly realised something far more frightening had happened when crew members reported two white stripes of smoke streaming past the jet’s tail, only 100 metres away. Missiles had narrowly missed his aircraft.

Al Qaeda later claimed responsibility for the attacks. The attacks bore plenty of Al Qaeda’s trademarks: double attacks, synchronised, well-organized and well-coordinated, based on good local surveillance and precision timing, in a part of East Africa where the terrorist organisation has long operated.

Kenya was the site of Al Qaeda’s bloodiest attack before September 11th, 2001: the bombings of the U.S. Embassies in Kenya and Tanzania on 7th August 1998 that killed 224 people and wounded over 5,000.

The most worrying aspect of the Mombasa attacks was that terrorists fired a MANPADS at a commercial airliner. Terrorists demonstrated that they are able and ready to shoot down vulnerable civilian planes anywhere as they take off or land, when a heat-seeking missile can lock onto a plane’s engine. The Mombasa attackers used an antiquated Soviet-era SA-7 Strela that missed only because of equipment malfunction or operator error.

But modern shoulder-fired missiles circulate around the world’s weapons black markets, where they often sell for a few thousand dollars each. Some military planes are equipped with automatic anti-MANPADS systems, but no commercial airline – with the possible exception of Israel’s El Al – has been willing to spend the estimated $3 million per plane that it would take to protect its aircraft. Some security experts have warned that such systems need to be put on civilian airliners in view of the MANPADS threat.