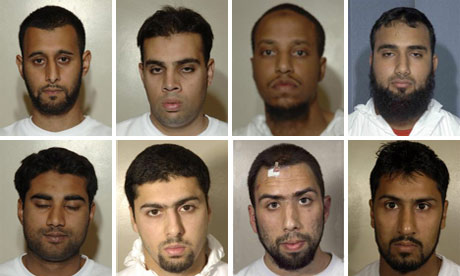 A major terrorist plot to commit mass murder on an unimaginable scale by destroying passenger jets in mid-air was foiled by British police in August 2006. The British terrorist cell planned to detonate suicide bombs on seven transatlantic flights over North America to kill about 1,500 passengers and crew. The seven aircraft were destined for six American and Canadian cities: New York, WashingtonDC, Chicago, San Francisco, Toronto and Montreal. The key component of the bombs was to have been liquid hydrogen peroxide explosive carried in 500ml bottles of soft drinks. The devices would be carried in hand luggage, along with detonators made from batteries and disposable cameras. (Each terrorist planned to carry another drinks bottle which they could sip from in front of security screeners, so as not to arouse suspicion). The bombs would have been assembled in flight and the devices detonated to deadly effect. No actual date had been finalised by the cell for the series of attacks but they had conducted detailed research on flights leaving Londonbetween August and October 2006. The date range included the fifth anniversary of the September 11 attacks.

The list of ingredients to be used in building the liquid explosive IEDs powerful enough to blow airliners out of the sky seems innocuous. The main explosive component was hydrogen peroxide. The chemical has many legitimate uses – it’s a common disinfectant and component in hair bleach – but when mixed in the right proportions with other organic materials it becomes highly explosive. In this plot, the peroxide was to be blended with Tang, a powder with a high sucrose content used to make a fruit-flavoured soft drink. The terrorists had intended to drill small holes in the bottom of drinks bottles and empty their contents. The bottles would then be refilled with the hydrogen peroxide and Tang mixture, using a syringe and the bottom of the bottles would be sealed with blobs of superglue. By draining and refilling the soft drinks bottles through the bottom, the conspirators would leave the seals intact giving the impression they had never been opened.

The devices were to be set off by high-explosive detonators made of hexamethylene triperoxide diamine (HMTD), a popular home-made explosive that terrorists have used in a large number of suicide bombings throughout the world, including the 7th July 2005 London suicide bombings. HMDT can be made using ordinary ingredients like hydrogen peroxide (hair bleach), citric acid (a common food preservative) and heat tablets (used by campers for cooking). In the UK liquid explosives plot, the HMTD was to be inserted in the casing of AA 1.5v batteries and the explosions initiated by a disposable camera as a power source.

But British police had been secretly monitoring the terrorists, most of them British citizens of Pakistani origin, since late 2005, and moved in to make arrests on 9th August 2006, after discovering they were close to staging their suicide attacks. That operation prompted a massive security alert at airports worldwide. Passengers were banned from carrying hand luggage, many flights were cancelled, and chaos ensued at airports around the world. The continuing restrictions on carrying liquids on aircraft are a direct result of security measures imposed after the plot.