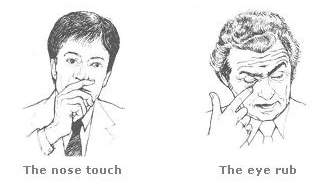 Profiling focuses on a variety of factors, but body language is central. Between 60% and 80% of communication is non verbal.

When an individual lies, the body tends to give away clues that the person intends to deceive – for instance, raising the pitch of the voice, looking away from the person one is talking to, or flying into a tirade when questioned. Sometimes, tells may be normal responses, particularly in an airport.

Although many emotional responses are not absolute evidence of deception, they are worthy of additional attention while the person conducting the profile seeks more information to make a threat assessment.

Although we may communicate primarily with our voices, our bodies can project many different messages. Deception clues may be in the form of a micro facial expression, swallowing a change in breathing patterns, sweating, body and leg positioning, a slip of the tongue or a voice inflection.

Why can’t liars prevent these behavioural betrayals? Sometimes they do. Some lies are performed beautifully; nothing in what the liar says or does betrays a lie.

Liars do not always anticipate when they will need to lie, so there is no time to prepare a response and its delivery.

Even when there has been time, someone may not be clever enough to anticipate all the questions that may be asked. This is why good security questioning often involves a series of questions, some of them seemingly unrelated to security.

The second reason liars cannot always prevent body language from revealing deception is because of the difficulty in concealing or falsely portraying emotion. When liars choose to lie, they generally prefer to conceal rather than falsify. Concealment is passive, not active.

This is because when a lie is told, it forces the liar to remember every single strand of the lie in order to ensure their story stands up.

The 2 main indicators from which leakage will come out are the Hands and Face as it is hard to control each one and especially both at the same time.

When a young child lies they will often cover their mouth with their hands to stop the lies making their way out.

This behaviour remains present in adults, although it becomes much more delicate and less visible.

The following motions to the face are the most common lie indicators:

We can find several physiological signs in the face that the liar will find difficult to disguise:

Although very similar, these physiological signs should not be mistaken for mental stress indicators such as finger tapping, voice shivers, cracking joints and nervous giggles.

However, it is always important to remember that; “Not everyone who is stressed is a liar but every liar is under stress”.

When involved in criminal or terrorists activities, people will often behave in suspicious and abnormal ways.

There are many examples of suspicious behaviour with one of the most famous being associated with the events of 9/11.

Michael Tuohey who checked in two of the terrorists; Mohamed Atta and Abdulaziz al-Omari noticed the following suspicion indicators in their actions and behavior on the morning of 9/11:

The following indicators can be seen as suspicious and should be acted upon: