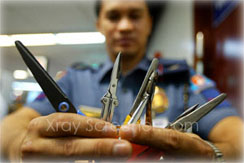 There are many bladed and sharp items that could be used as weapons in the hands of malicious individuals, so they are fobidden in hand baggage at most airports. These include:

Knives come in a bewildering variety of sizes and shapes. A knife’s blade can be made of metal, ceramics or composite plastics. There are also many plastic, glass, and wooden sharp objects that can be used as knives. These materials are characterised by very faint, low-density responses in X-ray projections and are very hard to distinguish by screeners.

The September 11th hijackers predicted the weakness of the airport security checkpoints which prevailed at that time, particularly when it came to the detection of bladed items, and so hid small box-cutter knives in their hand-luggage to use in seizing control of the aircraft. Before finally using the aircraft as missiles to attack targets, they used the knives to injure or kill several passengers and crew members.

Even if screeners had discovered the boxcutter knives which the hijackers used for the attack, they might well have let them pass. At the time knives could legally be carried aboard planes if the blades were less than four inches long and not considered “menacing”.

Often a knife’s blade and handle will be made of contrasting materials. You may find it relatively easy to identify a large, dense, and predictable object like a knife viewed from the side, where its shape will be very recognisable. But if the blade edge is viewed from above, what you will see is just a thin line.

A knife will always be harder to identify if it is not viewed from the side. Also a knife will be far more difficult to identify if the blade is folded or concealed, such as a penknife, switch-blade or gravity knife.

The challenge of detecting something like a knife could be made very difficult still, if a terrorist packed his bag carefully, placing the knife at the edge of the suitcase, partly obscuring it with the suitcase’s metal frame; or hid it under a lap-top computers or a hair dryer, for example. This will make it even more difficult for you to recognise a familiar ‘knife’ pattern on the image.

As well as bladed and sharp items, there are also some “Blunt Instruments” capable of causing injury that are forbidden by most airports to be carried in hand baggage. These include: