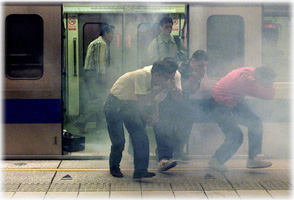 We have witnessed the emergence of new terrorist groups, including right wing extremists and extremist religious fundamentalist groups, whose aims are not to bargain with governments, nor to win over public opinion to their point of view, but rather to cause the maximum possible amount of carnage and disruption.

After the horrific attacks of September 11th 2001, we can be in no doubt that today’s ruthless and innovative terrorists will attempt to use unconventional devices in future attacks to inflict maximum casualties.

The Liberation Tigers of Tamil Eelam (LTTE) were the first terrorist organisation to stage a chemical weapons attack. In June 1990, the group used chlorine gas in its assault on a Sri Lankan military camp. The terrorists who conducted the September 11th attacks tried to obtain licenses to transport toxic chemicals, indicating that they had access to hazardous chemicals. There can be no doubt that, if given the opportunity, terrorist groups such as al Qaeda will not hesitate to use chemical agents in future attacks.

Chemical weapons are chemical compounds that have a strong, deleterious effect on the human body, even when encountered in small doses. The different types of chemical weapons include vesicants, which blister and burn on contact; choking agents, which cause lung damage; and nerve agents, which interfere with the nervous system and may lead to death. The effects from chemical weapons may occur very quickly after exposure, on the order of minutes to hours.

The devastating effect of chemical weapons has been demonstrated in the past. In March 1995, members of the Japanese religious cult Aum Shinrikyo launched a coordinated attack with sarin nerve gas against commuters on the Tokyo subway system. For unsuspecting commuters it was the ultimate nightmare. Inside the packed rush-hour underground carriages, passengers suddenly began coughing, choking and screaming. Witnesses later said that several subway entrances resembled battlefields as injured commuters lay gasping on the ground with blood gushing from their noses and mouths. The highly publicised attack killed twelve people and left 5000 needing hospital treatment. If it were not for the prompt and massive emergency response effort launched by the Japanese authorities, and the fact that the sarin used was only about 30% pure, owing to its hasty production for the specific attack, the incident could have been far more devastating. The attack demonstrated just how easy it is for any small group of terrorists, with limited means, to engage in chemical warfare.

The frightening lethality of Chemical Weapons was most horrifically demonstrated in the Iran-Iraq War of 1988. Iraqi jets attacked the Kurdish town of Halabja with chemical weapons, including mustard gas and the nerve agents sarin, tabun, and VX. Over 5,000 people were killed and 7,000 severely injured.

And biological warfare is not only limited to diseases that directly target humans. Those that affect our food sources – wheat smut, rice blast, insect infestations, even foot and mouth – will in turn affect the humans that depend on them.

Formerly classified information about how to create biological weapons is now available for purchase on the Internet. Many are documents that were first published in the 1950s and the 1960s, and were classified as top secret. They can now be purchased by anyone with the money to buy them.

Anthrax spores formulated as a white powder were mailed to individuals in the government and media in the U.S. in the autumn of 2001. Postal sorting machines and the opening of letters dispersed the spores as aerosols. Several deaths resulted. The effect was to disrupt mail service and to cause a widespread fear of handling delivered mail among the public.

Biological warfare agents are virtually undetectable while they are in transit. In other words, if a terrorist wanted to carry a small quantity of a biological agent through an airport in a carry-on bag or checked luggage, there is no mechanism using routine security procedures, like x-ray screening, to identify the agent.

The only way to find it would be a physical search by a well-trained searcher or expert questioning by a trained passenger profiler. Experts have stated that the confined area of an airliner cabin would be an ideal environment for infecting people by deliberately releasing biological agents, especially if the terrorist had protected himself with powerful antibiotics or vaccination, beforehand.

Some security experts have suggested that suicide terrorists may even infect themselves deliberately and try to expose others to the disease by just traveling with them on aircraft. In such an attack, victims presenting themselves with symptoms would eventually be at great distances from the original site of exposure by the time symptoms occur, which will make identifying the source difficult.

In general, the biological terrorism threat is rising and the global threat of bioterrorist weapons is here and it is serious. Implementing effective systems of passenger profiling is probably the best defence against bioterrorist attack for the aviation industry.

The radiological terrorist device is unlikely to be nuclear devices as we generally know them, such as those that make up the nuclear arsenals of countries including the U.S., Britain, Russia and France. Manufacturing nuclear weapons is difficult even for countries with money, infrastructure, and scientific resources. Nuclear weapons involve a complex nuclear-fission reaction, and the expertise and materials necessary would be extremely difficult for any terrorist organisation to acquire.

Terrorists could, however, build cruder, radiation weapons, which are commonly called “dirty bombs.” A dirty bomb, or radiological dispersion device, is a bomb that combines conventional explosives, such as dynamite, with radioactive materials in the form of powder or pellets. Many types of radioactive materials with military, industrial, or medical applications could be used in a dirty bomb. Medical supplies such as radium or certain caesium isotopes, used in cancer treatments could be used. Worryingly, the International Atomic Energy Agency has documented almost 400 cases of trafficking in nuclear or radiological materials in the past 10 years.

The idea behind a dirty bomb is to blast the radioactive material into the area around the explosion and into the air. This could possibly cause buildings and people to be exposed to radioactive material. The main purpose of a dirty bomb is to frighten people and make buildings or land unusable for a long period of time. Radiation cannot be seen, smelled, felt, or tasted by humans. Therefore, if people are present at the scene of an explosion, they will not know whether radioactive materials were involved at the time of the explosion. A dirty bomb smuggled through an airport or seaport and then successfully detonated, could devastate the economy of an entire nation, because of the fear and anxiety it would cause.

On 23 November 1995 a container of the radioactive element cesium 137 was left in a car in Moscow, Russia by Chechen terrorists. U.S. soldiers searching an Al Qaeda installation in Afghanistan in 2001 found diagrams of a dirty bomb.

These hand-drawn diagrams showed a design for a bomb made with highly radioactive Caesium 137 wrapped around conventional high explosives. U.S. intelligence reports also describe a meeting in Afghanistan in 2001, at which Osama bin Laden was present, when one of his associates produced a canister, stating it contained radioactive material for use in a dirty bomb. Experts say a compact dirty bomb could, for example, be made by terrorists from a small charge of conventional explosives bundled with the radioactive material cobalt-60, which is regularly used in cancer therapy.

This type of bomb would be small enough to be concealed in a suitcase. Diagrams and documents on how to construct a ‘dirty bomb’ are readily available on the Internet and the expertise is not really much more than it takes to make a conventional bomb. If a “dirty bomb” exploded in a major city, mass evacuations of citizens could be necessary.

These are the precise reasons why dirty bombs are such an attractive weapon to terrorists. Their main goal is to get publicity and inspire terror, two things a dirty bomb would certainly accomplish.

A person or item that has been exposed to a hazardous chemical, or radioactive or biological material may become contaminated and could contaminate other people or items. Anyone affected by a chemical or biological agent requires immediate attention by professional medical personnel. Remember, many hazardous materials do not have a taste or an odour. You must learn to recognise the possible symptoms of contamination.

If you believe you may have touched an item which contained a chemical, biological or radioactive agent – or suspect you have been contaminated – get immediate professional medical assistance.

If immediate medical assistance is not available, follow the following procedures: