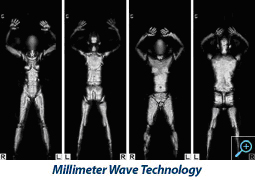 Following the attempted bombing of Northwest Airlines Flight 253 on Christmas day, 2009, many airports around the world are planning to implement full body scanners as part of their security checks.

There have been many conflicting stories regarding their effectiveness in detecting threat objects, speed, impact on health and whether they infringe on human rights and rights to privacy.

Q: How do these full-body scanners work?

Backscatter machines direct a very low dose of X-ray energy at a person standing in front of a refrigerator-sized machine. The X-rays scan the person from head to toe, penetrating clothing and reflecting off the skin and any solid objects underneath the clothing.

A: According to the TSA, the American College of Radiology and other professional organisations the technology is harmless, however like all new technology it is difficult to establish its safety until the technology has been tested over several years.
Millimeter wave energy is common in the world, and the scanners produce far less energy than a cell/mobile phone.
According to the National Council on Radiation Protection and Measurement (NCRP); a traveler would need to experience 100 backscatter scans per year to reach what is called as a Negligible Individual Dose (NID). NID is the “level of average annual excess risk of fatal health effects below which efforts to reduce radiation exposures to the individual are unwarranted.” Therefore, a traveler would require more than 1,000 such scans in a year to reach the effective dose equal to one standard chest x-ray.
Anyone who is still worried by the technology can refuse the body the scanner, and instead opt for a physical pat down.

A: A full body scanner will carry the same function as a physical pat down. It will find any item that is on a person, whether strapped or in a pocket.
Unlike the current metal detectors used in airports, it can detect non metallic items such as drugs, plastic explosives and chemical explosives.

Q: What can they not uncover?

A: Any item that is stashed in a body cavity. The body scanners will therefore be no use against a terrorist stashing an explosive device in a cavity, a tactic which has been discussed in terrorist forums online.

A: Up until now the scanners have been used sparingly, mainly in a testing capacity, due to worries that they infringe on passengers’ rights of privacy.
In U.S. airports, the Transportation Security Administration has begun expanding the use of full-body scanning machines. The TSA has 40 in place, just bought 150 and plans to buy 300 more.

Q: Is there a way to make the scans less revealing?

A: Currently the image that appears shows the curves of the person and can be likened to a “strip search” however the technology is continually evolving, and many manufacturers are developing scanners that reduce the clarity of identifying details. This includes blurring the face, or producing a chalk outline of the body.
New software is currently being developed that converts the real x-ray image of the person being scanned into a stylized 3D image, maintaining any area of the body where objects are concealed under clothing or within pockets.

Q: What is being done to make sure images are safeguarded?

A: Full-body images should be viewed in a walled-off location not visible to the public. The security officer assisting the passenger cannot view the image, and the officer who views the image doesn’t see the passenger. If the officer viewing the image sees something of concern, he notifies the agent who is with the passenger to carry out further screening. Officers who view the images will not be allowed to take cameras or cell phones into the screening rooms.
The TSA states that the machines cannot save and print images. However, it has been widely reported in the press that as part of their technical specifications, the TSA wanted the machines to have these functions albeit disabled.

Q: How long does it take to be scanned?

A: The machines are getting faster but still can take up to 15-30 seconds to scan a traveler and to assess the x-ray image, which would make the process slower than using metal detectors.

Q: Can they be used on every passenger boarding a flight?

A: No airport currently has enough body scanners to screen every passenger. For example, in the U.S., there are 730 checkpoints with 2,100 security lanes at the nation’s 450 airports, and there are thousands more lanes at airports around the world.
Amsterdam Airport’s 15 scanners won’t be enough to screen every U.S.A bound passenger, so pat-down searches will still be used.
Another reason is expense; machines are currently $130,000 to $200,000 each.
The fact is, at this moment if every passenger was to be screened it would create long queues which could become a terrorist target.

Q: Will it improve security and stop terrorists?

A: Terrorism Intelligence reports shows a growing trend towards terrorists concealing explosives internally, something that could not be stopped by a body scanner.
They cannot detect low-density materials such as explosive powders like the PETN used by Abdulmutallab in his attempt to bomb Flight 253. They would also have trouble detecting liquid explosives and thin pieces of plastic explosives like detonator sheets.
Terrorists are creative, for example Richard “the shoe bomber” Reid, and will always find ways to get past security checks.
The high expense of these full body scanners could cut funding to more proven measures of security, like training security personnel.

In summary, full body scanners cannot be viewed as the sole solution to screening passengers. It currently has, like most security technology, flaws and should therefore only be viewed as a useful addition to well-trained and aware security personnel.