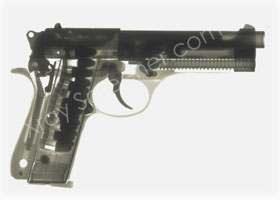 The term “firearm” generally refers to any lethal barrelled weapon from which any shot, bullet or missile can be discharged. Under the laws of many countries the term ”firearm” also includes any article having the appearance of being a firearm, whether it is actually capable of being discharged or not.

Items forbidden by most airports to be carried in hand luggage include:

Any object that can or appears to be able to shoot a projectile or cause injury, including the following:

Improvised firearms can be the hardest to detect on X-ray, as they can be of various sizes and shapes, and not have the characteristic shape of a “gun”. Firearms are even available from some gun manufacturers, disguised as walking-sticks – and guns are manufactured which look like pens, key rings and many other day-to-day items.

Criminals will sometimes saw-off the barrel and butt of a firearm, to help make it shorter and more concealable; and therefore less recognisable or pack firearms in a way that they are likely to be viewed at acute angles when the bag is laid on the conveyor of the X-ray machine, making them harder to identify. You must develop an awareness of the factors that may affect identification of firearms and all other prohibited articles, such as the angle they are viewed from, as well as the materials they are composed of.

Terrorists frequently use “handguns” in their attacks, as they are easily obtainable and often small enough to be easily concealed amongst other items in a packed bag or case. There are two main categories of handgun: the pistol and the revolver. Revolvers are one of the most popular gun designs of all time. Their design is so simple that they almost never jam or misfire.

Handguns not only differ in general shape and size, but can also be constructed from metals, plastics, composite materials, and wood butts or grips. Every firearm is designed to use a certain calibre or gauge of ammunition. Most guns, manufactured or improvised, will use a bullet or shotgun cartridge. Bullets and shotgun cartridges are, again, manufactured in a wide range of sizes. You should always be alert to bullets or shotgun cartridges that may be present in other seemingly innocent items, including pens and sticks.

Identifying a handgun in a bag can be difficult, especially if it is concealed behind other dense items, or viewed from the top or bottom, rather than the side, where the “gun” shape will be less obvious. A terrorist may also partially dismantle a gun, to make the component parts less recognisable as a firearm. It is important to become familiar with the appearance of firearm components, as well as fully assembled weapons by regularly practicing on an X-ray CBT system.

Typically guns would be concealed by terrorists within electrical items; within suitcase linings, to take advantage of metal reinforcing strips and suitcase frames; behind very dense items; or placed at acute angles. Remember, a gun can look very distinctive in side profile, but may not be so easily recognisable when viewed from the top or front – or if it has been fully/partially dismantled. To identify any prohibited item, you need to be familiar with the item’s composition and its main components.

You can think of a firearm, not as a “gun”, but as a set of parts. Knowing what these parts are will help you to identify many firearms. An easy way to remember and recognise the parts of a firearm is the old phrase “locks, stock, and barrel.” The ‘lock’ is basically the mechanism that fires the weapon. The ‘stock’ refers to the frame and the handle. And the ‘barrel’ is the tube that the bullets are fired out of. A firearm can quickly be dismantled into these three parts, to make concealment easier.