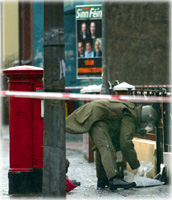 In one of the most notorious postal device campaigns, Theodore Kaczynski, known as the Unabomber, sent devices in the United States which killed three people and injured twenty-eight over a twenty-year period, from the late 1970s through the mid-1990s.

Franz Fuchs, an Austrian mailbomber, killed four people and injured 15 with postal devices in the mid-1990s.

Singer Björk was sent a postal device containing explosives and hydrochloric acid in London in 1996. The device did not reach Björk, it was intercepted by the UK Police.

Anthrax spores formulated as a powder were mailed to individuals in the government and media in the U.S. in the autumn of 2001. Postal sorting machines and the opening of letters dispersed the spores as aerosols. Several deaths resulted. The effect was to disrupt mail service and to cause a widespread fear of handling delivered mail among the public.

Lucas John Helder was a university student who in May 2002 earned notoriety as the “Midwest Pipe Bomber”. Motivated by a hatred of the government and by violent rock music lyrics, he planted motion-activated pipe bombs in mailboxes across the United States. The devices were packed with ball-bearings and nails to add to the deadly shrapnel. Six people – four postal workers and two residents – were wounded by bombs left in mailboxes in Illinois and Iowa. In response to the threat, authorities asked residents in several states to leave their roadside mailboxes open to give nervous letter carriers a clear look inside.

In December 2003, European Commission President Romano Prodi escaped unhurt after a postal device was delivered to his Bologna home in Italy. The item, a wrapped book, burst into flames as he opened it. “There was a big flame but without an explosion. It burned a piece of furniture and the carpet” Prodi said.

Several letter bombs were sent during January and February 2007 to various UK companies and agencies, all related in some way to DNA testing and road transport. The devices were sent in A5 Jiffy-style envelopes and injured nine people.

Also in January and February 2007, a bomber calling himself “The Bishop” sent several postal devices to financial firms in the United States.

Postal devices are now one of the most common means of criminal attack upon organisations and individuals worldwide. Historically, the motives for mail bombs have included revenge, extortion and terrorism. The ease with which postal devices can be sent and the anonymity afforded the sender makes them extremely attractive and deadly tools for vicious and calculating individuals. Postal device senders never need to come face to face with the people they maim or kill.

Recognising postal devices is difficult, because their physical appearance is limited only by the imagination of the senders. The traditional postal bomb takes many forms – parcels, padded jiffybags, or envelopes of any shape or size. They may be delivered by hand or via a courier as well as through the post.

Postal bombs are generally designed to kill or maim the person who is opening them, but a parcel bomb may be large and designed to cause mass casualties and structural damage. It is usually not necessary to open the envelope or package in any particular way to initiate a postal IED. They can often be triggered off by any, even a slight, attempt to open the outer cover.

Package bombs, including book bombs, are often triggered by electrical systems. Most letter bombs use a mechanical detonation system rather than an electrical one. In the letter bomb a detonator and mechanical assembly is often placed between two sheets of cardboard and plastic explosives are packed around it. The pressure of the envelope around the device keeps it from detonating. But once the pressure is removed as when someone pulls the contents out of an envelope, the device will detonate.

The first rule is to never open any letter or package until you have inspected it thoroughly. Violate that rule and all the other knowledge in the world about postal devices is useless to you. The second rule is to – after checking the letter or package against the list of warning indicators – take the appropriate action.
Some typical characteristics of postal devices, which ought to trigger suspicion, include letter/parcels that:

With suspicious envelopes and packages other than those that might contain explosives, take these additional steps against possible biological and chemical agents:

If you become suspicious of a mailing and are unable to verify the contents, observe the following safety precautions: