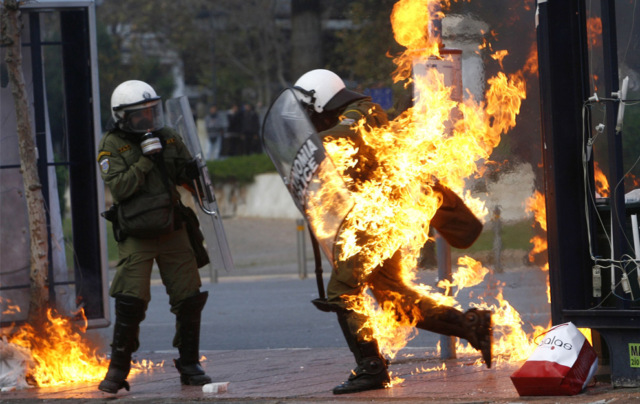 An IID is a device designed to destroy, incapacitate, harass, or distract by creating intense heat and fire, rather than by exploding.

The usual intention is to cause economic damage and weaken public confidence rather than cause mass casualties. But terrorists are aware that attacks with incendiary devices will cause people seeing smoke and fire to panic, which can cause casualties. Fire bomb attacks also draw in first responders, who can then be the targets of a second-phase attack with Improvised Explosive Devices (IEDs). This tactic was used by the IRA terrorist organisation in Northern Ireland during the 1970s and 1980s.

An IID’s design is limited only by the terrorist’s imagination and ingenuity. Incendiary devices are fairly simple to make and do not require access to explosives. An IID can be a simple matchbook and burning cigarette arrangement, or a complicated self-igniting chemical device. IIDs often contain flammable liquids; or pyrotechnic or incendiary chemicals.

The Molotov Cocktail is the most well known IID – usually a bottle containing inflammable liquids, sometimes combined with volatile chemicals or even ordinary household sugar. The component parts of an IID will generally be an Incendiary Material, for example Petroleum; a means of ignition with possibly its own power source, like batteries; and a timer mechanism to control exactly when it ignites. Torches or flashlights are sometimes used to ignite IIDs. The glass of the bulb is broken to expose the filament which is then used as a “hot wire” igniter. Any bottle of liquid in luggage should be treated with suspicion, as it may be a component part of an IID or IED.

When planning protective measures in office/retail premises, remember that incendiaries are generally small, that they ignite often when the target premises are empty, and that there is usually more than one device. The attacker will regard the attack as a success even if they do no more than trigger the sprinkler system, which itself can cause damage. You can make regular checks on fire extinguishers, sprinklers, smoke alarms and fire blankets. Since anyone finding a suspect device will probably be unable to tell whether it is incendiary or explosive, brief them to clear the surrounding area and call the police. If a device ignites, it may be sensible to make an immediate and brief attempt to extinguish it – provided normal fire arrangements and staff training are adequate. Remember, however, that there may be a number of devices and be prepared to evacuate the building according to pre-arranged plans.